One of the definitions you’ll find in Webster’s for the word “grassroots” is this:
Totally new.

With that in mind, the Hope Christian Huskies on Monday morning strapped on their shiny green helmets at 6 a.m. and held a football practice for the first time ever.

“I was waking up all through the night, checking the clock, seeing if it was time to go yet,” said junior Micah McNeil, Hope’s quarterback. “We’re all excited to be here.”

Did we say new? The Huskies are a textbook example of starting from scratch.

“I’d say 80 percent of our kids have never played football,” Hope coach Peter Darrel Kindig said. “They don’t understand the principles of football. We’re having to coach them at an ABC level.”

The sport sprang up from nowhere over the course of eight frantic months. The school, which opened in 1976, had never offered football.

“We had all these obstacles and we didn’t think we could have it,” said athletics director Jim Murphy, in his 28th year with the school.

There were financial constraints, Murphy said. The lack of a field. Not enough students who’d be interested.

This is where it became an organic thing.

It began, it is believed, with a sophomore student named Jordan White, a football fan who wondered why there was no program.

“I love Hope,” White said, “but there was no football. I thought, might as well give this a shot. What’s the worst that can happen?” 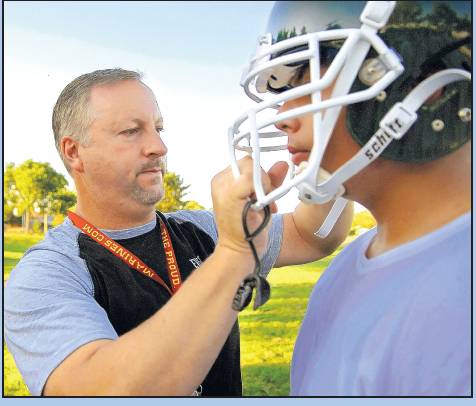 He gathered a few dozen signatures from students supporting the idea, and soon a Hope parent — Kindig — got wind of it from one of his daughters who attends the school.

“She came to me and said, ‘Dad, this is wrong,’ ” Kindig said. “The kids need football and nobody was listening.”

Convinced it could fly, Kindig ran with White’s legwork to school brass, who finally green-lighted the project after Kindig convinced them he could overcome the challenges of a first-year program.

“Coach Kindig answered all the questions we had,” said Murphy.

So, Kindig, 44-year-old a retired state cop who owns three businesses and also is a senior pastor at two dozen churches in Africa — where he said he owns and operates four orphanages in Uganda — put most of his professional life on hold for a few months while he coaches this team.

“It has been a challenge,” he said. “We’re all in economic hardships, but our community and our parents have risen to the occasion to give these boys a chance to play football.”

Kindig told the school he’d raise the approximately $35,000 necessary to operate. They are still about $3,000 short, he said — money that covers travel expenses for the Huskies’ eight road games.

Each athlete paid $300 to participate, Murphy said, adding that sports programs must raise their own funds. Murphy quickly cobbled together a schedule that includes lengthy road trips to Cobre, Lordsburg and Mesilla Valley in Las Cruces, and now comes the business of actually training this team.

The Huskies had 64 players at Edmund G. Ross Elementary School on Monday morning just a short walk from Hope. All but 15 or so of the players are football neophytes; the ones with experience have been limited to YAFL, Kindig said.

“It was my senior year, and it seemed pretty logical to do something new,” said senior tight end Tyler Augster.  “When I first heard about it, I was kind of skeptical. Then people pushed me and I went for it.”

“I thought it would be fun,” senior lineman Mark Montessi said, his white T-shirt drenched in sweat. “It’s the inaugural year of football at Hope. Seemed like a no brainer to me.” 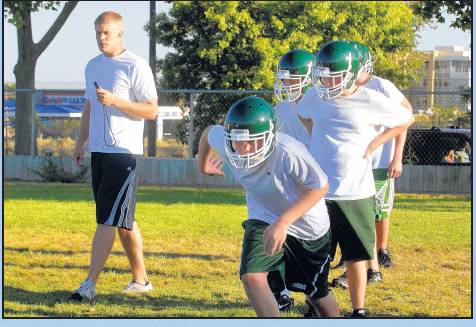 All the coaches are volunteers and most are parents, Kindig said. One of the assistants is former University of New Mexico quarterback Bryan Clampitt.

The use of the field at Ross was another gift, from APS. “They became the miracle we needed,” Kindig said.

As for competition, Kindig believes Hope will hold its own.

“We’re giving them the basics of football, the fundamentals, but I really think we’ll do exceptionally well this season,” he said.

Hope’s beginnings are certainly more modest than the area’s other varsity newcomer, Cleveland. The Storm played a freshman schedule last year, but are diving into District 1-5A this fall.

“The intensity of working on the varsity level versus working on the freshman level was quite a bit different,” Cleveland coach Kirk Potter said after the Storm went through a 3½-hour afternoon practice at Rio Rancho Middle School.

Like Hope, Cleveland doesn’t yet have a field to call its own, and it is doubtful Cleveland will play its home opener Sept. 4 against Gallup Miyamura.

Likely, Potter said, the game will be moved to Sept. 5, and be played at Rio Rancho High’s stadium.

Bernalillo is lending its facility to Hope for two games, and Murphy is hoping to play more home games in 2010. This is nothing new for Hope; the Huskies have solid programs in track and field and baseball, but the school campus doesn’t have facilities for either sport.

Still, that the Huskies are playing varsity football seemed a longshot.

“I never thought we would have it,” Murphy said.

“It’s amazing how we’ve pulled this together in six months,” Kindig said. “They are extremely excited about having football, and now it’s happening.”

Albuquerque Public Schools will be searching for a new athletic director.Kenny Barrera ...

All listed games kick off at 7 p.m. Friday unless noted. 1. Rio Rancho (6-0,…
My News
Most Read
Subscribe now to access decluttered news, chosen by you. Manage the news you want to see, read exclusive content and explore other subscriber benefits.